#DatPostmil? #5: The Problem with Preterism 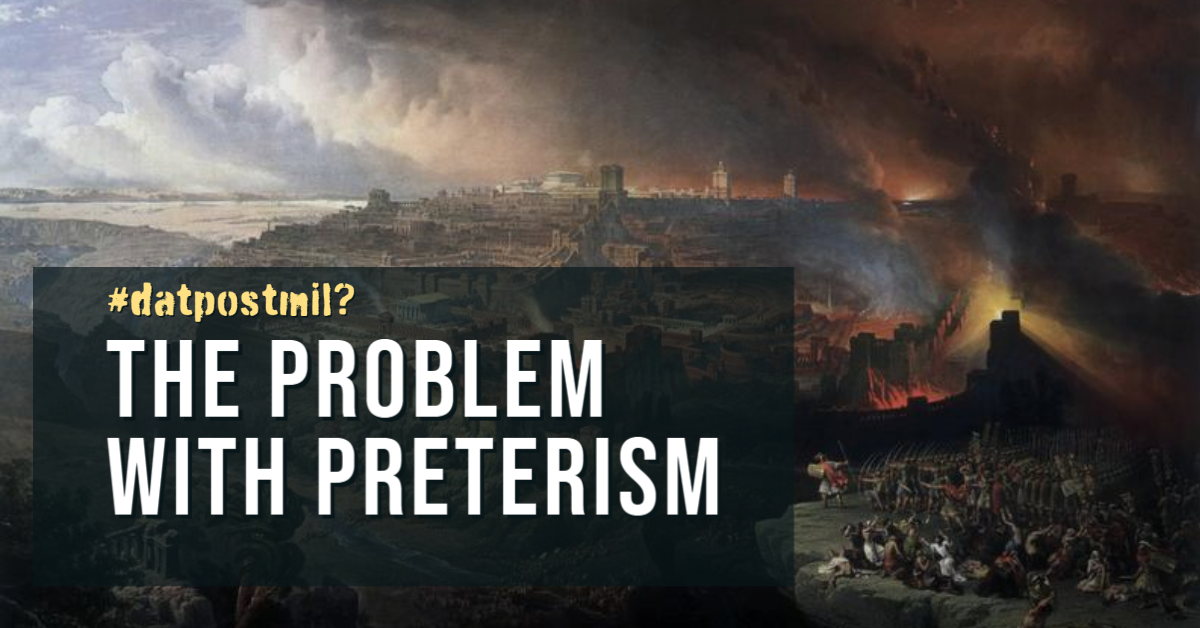 The Problem with Preterism

Preterism is one of a number of different methods of prophetic interpretation that have been adopted and defended by various biblical intepreters. A little background may be helpful before I come to my discussion of preterism in particular.

These contrasting methods of biblical interpretation often are used to speak of how various schools interpret the Book of Revelation. Common today is the futurist school which thinks that the Revelation beginning with chapter 4 speaks of a future time of tribulation and what happens afterward. Common in past centuries and especially around the time of the Reformation and afterward is the historicist school which viewed the Revelation as a symbolic, consecutive, chronological account of the history of the gospel age and afterward. It is noteworthy that this view is associated with the notion that the institution of the papacy was (and is) the antichrist. Becoming more common today is the preterist school which see the Revelation as written prior to the destruction of Jerusalem in A. D. 70. It sees its prophecies as fulfilled mainly in that event and the events leading up to it. There is a close association historically and currently between Postmillennialism and Preterism.

Truth in advertising requires me to say that I hold none of these views. Rather, I hold to a fourth view which may be called idealism. Though idealism is sometimes associated with a liberal approach to the Revelation, I hold to a redemptive-historical, modified form of idealism which sees the prophecies of the Book of Revelation as cycling through various apocalyptic pictures of the gospel age and what follows.

Each of these views has also been applied by the various schools to other of the prophetic portions of Scripture. Here I am particularly concerned with the preterist method which has been applied to 2 Peter 3, 2 Thessalonians 2, and Matthew 24. John Owen, on the basis of preterism, thought that the new heavens and new earth of 2 Peter 3 was the gospel age. B. B. Warfield suspected that 2 Thessalonians 2 was fulfilled in current events taking place in and around the destruction of Jerusalem in A. D. 70. J. Marcellus Kik and many others regard Matthew 24 as fulfilled by the destruction of Jerusalem.

One other piece of background to my discussion of preterism is this. What I have called “orthodox preterism” has an evil twin which I will call Hyper-preterism. The difference between the two views is important. Orthodox preterism believes that many or most prophecies were fulfilled in the past by the events surrounding the destruction of Jerusalem. Hyper-preterism believes that they all were. Thus, the Second Coming of Christ and the resurrection of the dead took place in A. D. 70. Hyper-preterism is, in my view, straightforwardly heretical. I do not use the word lightly!

I want to focus on the interpretation of Matthew 24 and the Olivet Discourse by orthodox preterism. (I offer another and what I think is a superior interpretation of Matthew 24 in my book, More of the End Times Made Simple. It is based on the wonderful interpretation of the Olivet Discourse by John Murray in the second volume of His Collected Works which is entitled, “The Interadventual Period.” I hope you will read either Murray or me if you are attracted by the preterist interpretation.) The simple fact is that orthodox preterists take language like the following as referring to a figurative or spiritual coming of Christ at the destruction of Jerusalem:

Matthew 24:27 “For just as the lightning comes from the east and flashes even to the west, so will the coming of the Son of Man be.

Matthew 24:29 “But immediately after the tribulation of those days THE SUN WILL BE DARKENED, AND THE MOON WILL NOT GIVE ITS LIGHT, AND THE STARS WILL FALL from the sky, and the powers of the heavens will be shaken. 30 “And then the sign of the Son of Man will appear in the sky, and then all the tribes of the earth will mourn, and they will see the SON OF MAN COMING ON THE CLOUDS OF THE SKY with power and great glory. 31 “And He will send forth His angels with A GREAT TRUMPET and THEY WILL GATHER TOGETHER His elect from the four winds, from one end of the sky to the other.

Matthew 24:36 “But of that day and hour no one knows, not even the angels of heaven, nor the Son, but the Father alone.

How is this relevant to Postmillennialism? It is relevant simply because many, if not most, Postmillennialists have adopted orthodox preterism as the hermeneutic most amenable to their position. I think they have been right to do so in the sense that the other views (with the possible exception of historicism) are not consistent with their views. 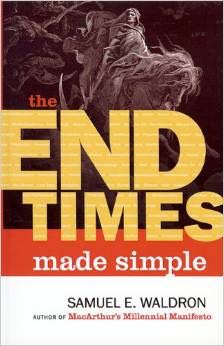 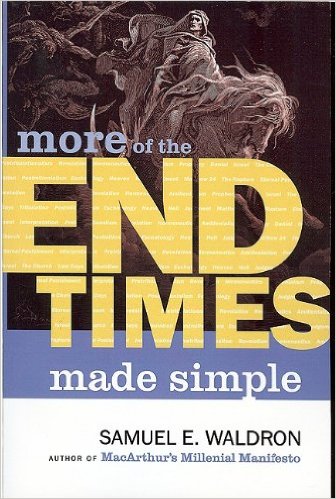 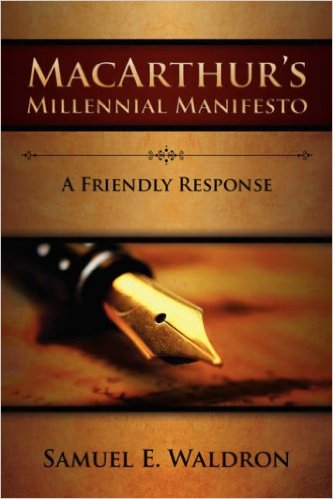 Dr. Sam Waldron is the Academic Dean of CBTS and professor of Systematic Theology. He is also one of the pastors of Grace Reformed Baptist Church in Owensboro, KY. Dr. Waldron received a B.A. from Cornerstone University, an M.Div. from Trinity Ministerial Academy, a Th.M. from Grand Rapids Theological Seminary, and a Ph.D. from Southern Baptist Theological Seminary. From 1977 to 2001 he was a pastor of the Reformed Baptist Church of Grand Rapids, MI. Dr. Waldron is the author of numerous books including A Modern Exposition of the 1689 Baptist Confession of Faith, The End Times Made Simple, Baptist Roots in America, To Be Continued?, and MacArthur’s Millennial Manifesto: A Friendly Response.

Sign up to get notified of new CBTS Blog posts.

Why is Theonomy Unbiblical?

Before critiquing theonomy, we need a good definition. Some people today who use the word “theonomy” don’t mean anything more than “God’s law” because the etimology of the word theonomy is “theos” which means God, and “nomos” which means law. They only want to affirm that God’s law is supreme over man’s law. And they’re right about that. God’s transcendent moral law is the norm that norms all norms. Governmental laws should always be consistent with God’s law and human law must never violate God’s law.

But in this post, I’ll be using the word “theonomy” in a more technical sense, which is rooted in the historic usage of the term. 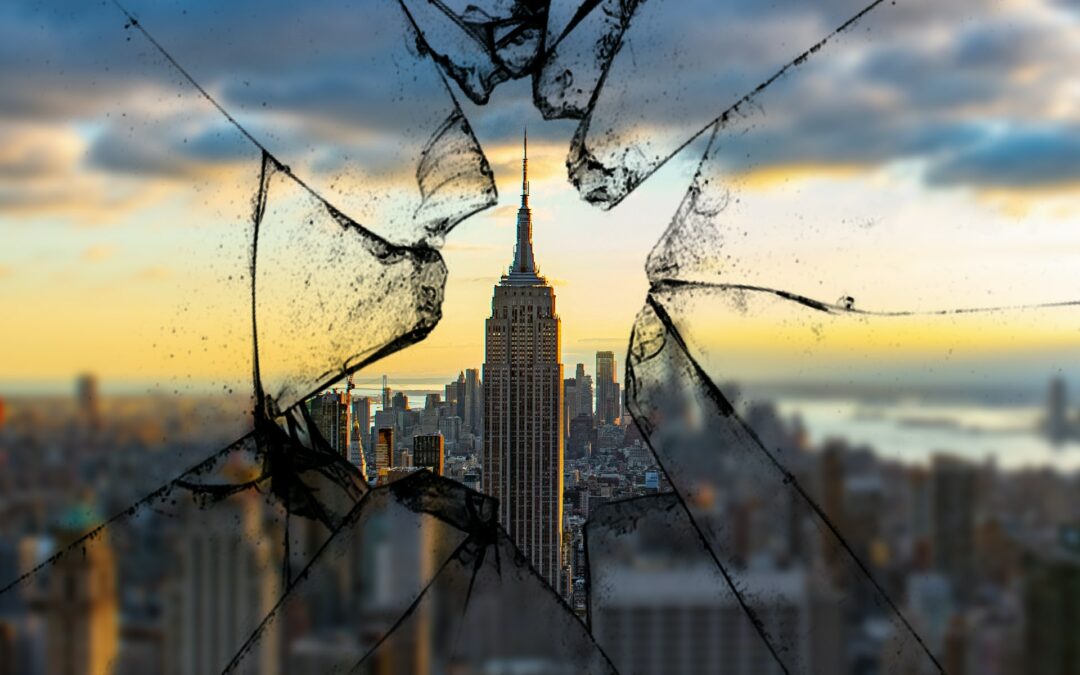 It is always a humbling and learning experience to read the responses to a blog series on a controversial subject. Iron does sharpen iron, as the Bible says, and I learn much from those responses. Some postmils have taken a little umbrage at my description of Postmillennialism as a millennium involving a distinct, golden age following the one in which we live.

Part 1 Caveat comes from the Latin cavere.  The verb in Latin means to be on guard.  I am using its English descendant caveat to mean a warning or caution.  Such is my esteem for John Owen that I prefer the softer idea of caution. John Owen has attained (and not...

← DatPostmil? #4: Does the Growth of the Kingdom Require Postmillennialism? Is "General Equity Theonomy" a Confessional and Biblical Doctrine? →

You have Successfully Subscribed!